Dek-Net is a system design in line with current directives as laid out in the RHA Guidelines.

Dek-Net is a system design in line with current directives as laid out in the RHA Guidelines The objective of the system is to contain the load in the upper deck area while offering restraint on the load within the lower deck area.

This is achieved by a single action, using the tension strap and buckle to apply the required amount of tension. The DEK-NET is made to the XL specification.

DekNet is an innovative Load Restraint System which increases efficiency, ensures safety, saves money and can be retrofitted into any existing curtain sided vehicle currently on the road. 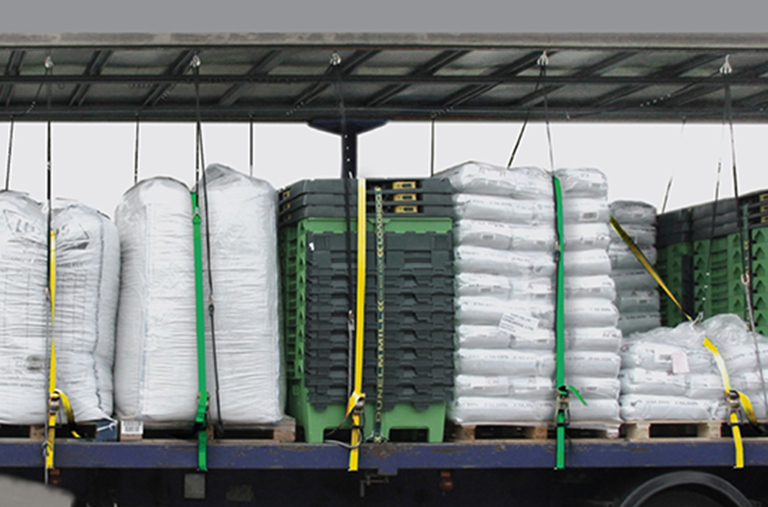 The regulating body VOSA (Vehicle Operator Servicing Agency), soon to become the DVSA (Drivers and Vehicles Standards Agency), have announced their intention to step up enforcement of current legislation in respect of load restraint on Large Goods Vehicles. Particular attention has been noted in regard to curtain sided vehicles.

“Curtain sider trailers are essentially flatbed trailers with a weather-protection structure mounted on the bed
of the trailer.”

The load carried by a motor vehicle or trailer shall at all times be so secured, if necessary by physical restraint other than its own weight, and be in such a position, that neither danger nor nuisance is likely to be caused to any person or property by reason of the load or any part thereof falling or being blown from the vehicle or by reason of any other movement of the load or any part thereof in relation to the vehicle.

In order to protect other road users, VOSA can enforce a range of regulatory powers, such as:

HSE and VOSA recognise that a very high percentage of load restraint systems currently rely on the strength of the vehicles upper body to restrain the loads using basic buckles and straps suspended from a roof mounted centre pole or track. Since the vehicle body above the flat bed is predominantly designed for weather protection, they do not normally have sufficient strength to be part of a load rated restraint system and are more likely to fail in an emergency.